It's cold out, and that means it's barbecue season. (for me anyway) 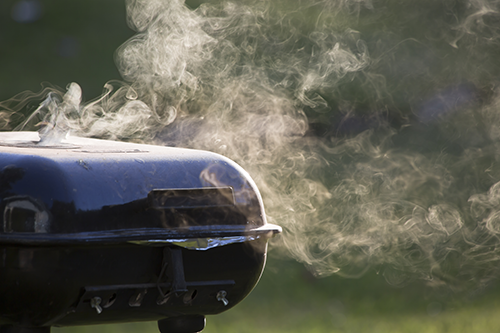 The word barbecue can refer to a way of cooking with fire, the food cooked in this manner, or even the outdoor party where people eat all that smoky deliciousness. But where did the word originate? Fix yourself an ice-cold beverage and let's lift the lid on some very American etymology.

Arawak (or Arhuaco) is the name used to describe some indigenous peoples in South America and the Caribbean islands. Though geographically widespread, and composed of numerous tribes, the Arawak people speak related languages, which are all part of the Arawakan family. This language group, which likely originated in the area that is now Bolivia and Colombia, was the predominant language of South America and the islands when Europeans arrived in the fifteenth century. Speakers of these languages in the Caribbean referred to themselves as Taíno, meaning "relatives." The Taíno were the first Americans that Europeans encountered when Christopher Columbus arrived at Guanahani island in the Bahamas in 1492.

Here's how that relates to the backyard barbecue we know today.

Barabicu is the Taíno word for a framework that's made of sticks and elevated above the ground on posts and used for different purposes. One was sleeping since they kept people safe from creatures prowling below.

(Speaking of sleeping, the word hammock comes from the Carib Indian word hamaca — the Carib were the other main inhabitants of the Caribbean islands at the time of the European conquest.)

Barabicu frames were also used for drying or cooking meat. Because they were fairly high up, out of range of the flames so the sticks wouldn't catch fire, food would cook slowly and pick up a lot of flavor from the smoke. On the island of Hispaniola, today divided between Haiti and the Dominican Republic, the local linguistic variant of barabicu was barbakoa.

Because smoky, slow-cooked meat is delicious, this culinary technique caught on among the invaders, giving its name to the meat as well as the method. Barbacoa entered Spain and spread throughout Europe from there: to Portuguese, then French, and into English by 1648. The first recorded use in English of barbecue describing not just the cooking method but also people gathering outdoors to enjoy the feast is from 1733.

In Mexico and parts of the U.S., barbacoa is still used to describe a different kind of traditional cooking, where goat, lamb, or beef is cooked for hours in a pit dug in the ground. And barbecue means different things in different regions within the U.S.; in the Carolinas, it's most often pork, while in Texas beef brisket is the king of meats. Other cities and states have their own specialties, and particular sauces and fans of each style will swear that theirs is the best or even the only true form of barbecue.

Without taking sides in whose recipe wins the taste test, we will say that any barbecue worthy of that name involves indirect heat, as in a smoker, for a prolonged period. If your meat is right over the flames then you're grilling, not barbecuing.

A final note: there are a number of theories regarding the origin of BBQ, from a rancher's brand to a nineteenth-century pool hall advertisement, but most experts agree that it's just an abbreviation, albeit an unusual one where the first letter of each syllable is included.