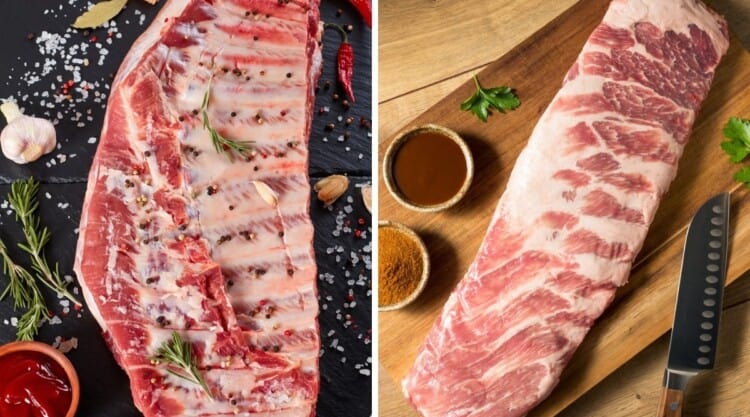 A rose, is a rose, is a rose, according to Shakespeare. When it comes to ribs, though, there are many differences between types worth knowing. If you are or plan to be more than just a casual griller, this is seriously need-to-know information.In a series of articles, we’re identifying the different kinds of porks ribs available to you, comparing their pros and cons (if there are any cons to ribs!), and teaching you how to prepare and smoke them. Plus, we’ll connect you with some of the absolute best recipes on the web for making mouth-watering, bone-sucking good ribs in your own backyard.This time around, it’s spare ribs versus St. Louis style ribs, two of the all-time greats. Which is which, and how can you tell? The answers are below.

“It’s important to note that we did not become rib masters overnight. It took time to learn the appropriate techniques. Tender, slow-cooked spare ribs require a certain amount of skill and experience.” – Pat Neely

Well, that’s why we’re all here, right? To learn how to make incredible ribs. No, it won’t happen the first time. But it will happen, and what a day that is!

Now, despite the big build-up in the introduction, it turns out spare ribs and St. Louis style ribs are basically the same thing. St. Louis ribs are, in fact, cut from the spares, so they share many characteristics.

From this information, we can conclude that a rack of spare ribs is larger than a rack of St. Louis. Incidentally, if you’ve seen or heard reference to “side ribs,” it’s just another term for spare ribs.

Spare ribs aren’t the most tender cut of meat, being so far from the loin. But, that’s where the magic of smoking comes in. Smoking them low ‘n’ slow makes them easy to eat and unleashes a ton of rich flavor.

Spare ribs are popular throughout most of the world, and you see a lot of them at ribfests and competitions.

Where on the Pig They Come from

Spare ribs are cut from the end portion of the rib cage, right down at the belly of the pig. They extend around the side of the pig and down to the breastbone, which the butcher removes.

They’re long rib,s and they come to a ragged end of extra meat and cartilage. Plus, spare ribs sport a bonus flap of meat called the skirt. A typical rack of spare ribs totals 11 bones.

How Much Meat and Fat do They Contain?

As mentioned above, there is a lot of meat on spare ribs, making them an ideal choice for parties and large crowds. They’re also blessed with a lot of fat. If fat doesn’t seem to you like a blessing, remember that fat equals flavor when it comes to meat.

Portion Size: How Many Spare Rib Ribs Per Person

A rack of spare ribs is physically large, but there aren’t a lot of bones. Plan on 4-5 bones per lucky person at your barbecue.

How to Prepare Spare Ribs for Smoking

Don’t be tempted to put an untrimmed rack of spare ribs in your smoker. While there may be a sense of primal delight, a little prep goes a long way.

To prevent unwanted chunks of burnt crud, trim any big flaps and nodules of fat and random sinew. Don’t worry, though – there will still be plenty of fat for flavor and juiciness.

More than likely, your spare ribs will come with a thin but shockingly resilient membrane attached to the bone side of the rack. Before you continue, this has gotta go. Yes, you can cook with it in place, but you’re just passing the job off to your guests, who will have to gnaw through it. Strip it away, and you’ll also get deeper, more even penetration of smoke, rub, and sauce.

Begin with a sharp paring knife. Slip the blade between one of the outside bones and the membrane and, with short, careful strokes, begin separating the two. Mind you don’t cut any meat off the ribs or your fingers. Soon, you’ll have a flap of membrane large enough to get hold of with your hands. Grab it, and peel away the membrane, hopefully in a single sheet.

If your recipe calls for marinade or brine, do it now. Allow several hours for liquids to soak in, or you may as well not bother. If you can leave it all night, that’s usually ideal. Once that process is over, you can massage in your spice rub before moving to the smoker.

How to Cook Spare Ribs in a Smoker

The preferred temperature for smoking spare ribs is 250F. Yes, that’s the high end of the low ‘n’ slow zone, but it’s suitable for such thick and large ribs. It’s still going to take the best part of the daylight hours to get the job done!

There are lots of wood choices available to the smoker, but not all of them are suited to ribs. Most midwestern and southern recipes will call for mesquite or hickory. Fans of sweet BBQ flavors will want to try cherry or apple wood. Oak is fine, but it’s a little too safe for our liking.

Next comes the old question: do I wrap my ribs or not? The answer to that is yes – probably.

It’s preferred by most pitmasters and barbecuers as it helps prevent ribs from losing their moisture while locking in the flavor. You can opt not to wrap your ribs, but you may find them a little drier that way. Still, it’s all a matter of personal preference.

If you’re using the famous 3-2-1 method to smoke your spare ribs, you’ll certainly wrap your ribs; it’s the “2” part of the system. If you’re not familiar with it, 3-2-1 works like this: smoke unwrapped at your target temperature for 3 hours, switch to wrapped for 2 hours, and then close it out with 1 hour unwrapped over higher heat. That’s the perfect combination for smokiness, juiciness, and crispy bark.

Apply your sauce, if you’ve decided to use any, during the last 30 minutes of the session. You risk burning it any longer, which is easy to do because most BBQ sauces are sugar-based.

Cook your spare ribs until they reach an internal temperature of about 190F – 200F. You’ll know it’s about that time when you start seeing exposed bones as the meat contracts, the meat is probe tender, and if you pick up the ribs with tongs, it will bend and start to crack slightly.

A Great Place To Start