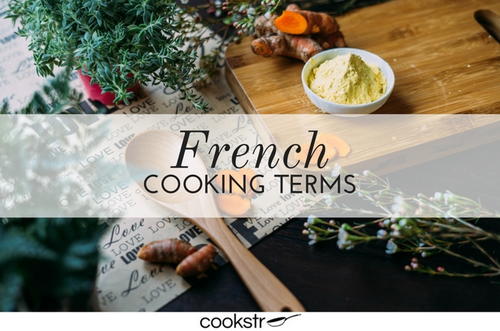 When you're first learning to cook, the vocabulary can be a little intimidating. Much of the terminology of cooking and baking comes from other languages, which can make the whole process even more difficult (and hard to pronounce).

French cooking terms, in particular, are notorious for being complicated and intimidating. While many of them do refer to techniques that are complex and extravagant, there's a good chance that you've done some of these things without even knowing the name for it. That's why we put together this dictionary of French cooking terms. The next time you come across a term in a recipe that you aren't familiar with, consult this guide, and you'll have your answer in no time.

From bain-maries to hors d'oeuvre, expand your vocabulary and channel your inner Julia Child with these French cooking terms and cutting techniques!

Bain-marie: Also sometimes called a double boiler, a bain-marie is a method of melting chocolate that prevents the chocolate from seizing up. To do this, simply bring water to boil in a small- to medium-sized pot, and then place a glass bowl on top of the pot. In the glass bowl, place the chocolate and the fat that you are using to melt the chocolate (usually butter or coconut oil). Then stir the chocolate until it is completely melted.

Brûlé(e)(r): You've probably seen this word in the past participle form, "brûlée," in crème brûlée. This is the French word for "to burn." In cooking, this usually means with a blow torch. 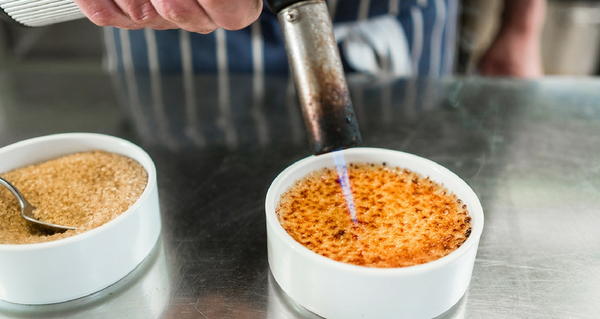 Learn French Cooking from the Master
Julia Child is credited with bringing tasty French dishes into American homes. If you're looking to try something french, consider one of her classic recipes.

Confit: A confit is a term for slow cooking in oils and fats, like a low-temperature version of frying. "Confit" comes from the French word for "to prepare."

Cuisson: "Cuisson" is simply the French word for "baking" and is used by chefs to refer to the quality of the bake or the cooking process and the skill of the chef. Something that is overcooked or undercooked would not have a good cuisson.

Dégorge(r): A method of removing juices from meat and vegetables (often fish). This method involves salting the meat and then soaking it in water and is usually done to remove strong or overwhelming flavors.

Dépouille(r): Removing the fatty layer of "skin" that appears on the tops of broths, stews, and sauces.

En croute: Refers to food that is wrapped in dough or a pastry and baked.

En papillote: Refers to food that is wrapped in parchment paper or foil so it will cook in its own steam.

Flambé(r): A method of brûléeing food by adding alcohol (usually brandy) and then lighting it on fire to burn out the alcohol.

Fondre (fondue): The French word for "to melt." The past participle form, "fondue" usually refers to melted cheese or chocolate that is used as a communal condiment.

Frappe(r): The French word for "to hit" or "to strike." This word is often used to refer to something that has been put through an ice bath or blended with ice.

Gratin(ée): The French word for "to grill." This word usually refers to a method of browning that involves adding breadcrumbs and cheese to a dish and then browning it in the broiler.

Quadrillage: The method of grilling meat and vegetables to create a grid pattern from the grill marks.

Sauté(e)(r): From the French word for "to jump," sautéing simply refers to the act of flipping a pan to make the ingredients "jump." (Pictured below)

Sous vide: From a French phrase that refers to something in a vacuum, sous vide is a method of cooking that involves sealing food in air-tight plastic containers and submerging in hot water in order to cook the food evenly and thoroughly to prevent burning or overcooking. 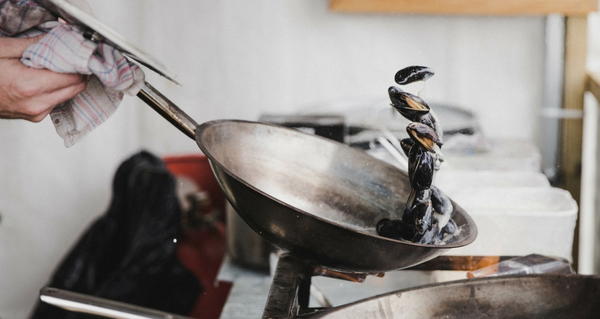 Curious About Sous Vide?
Check out our full article on sous vide cooking, how it works, and why you should try it! Learn all about the art of vacuum-sealed cooking. You might even want to try it after exploring sous vide 101. What Is Sous Vide Cooking? 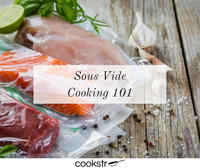 Alumette: A baton-style cut that is thicker than a Julienne but thinner than a Battonet.

Batonnet (or Jardinère): From the French word for "little stick," this style of cutting will give you small batons, like a thick Julienne.

Brunoise: A fine dice, usually made by dicing from an alumette cut. Often vegetables that are cut in the brunoise style are cooked in butter and used for flavoring soups and sauces.

Chiffonade: To cut into fine strips or ribbons.

Concasser: From the French word for "to crush," this refers to a rough chop or crushing, often of tomatoes.

Julienne: A very fine slice, like a thin stick or baton. 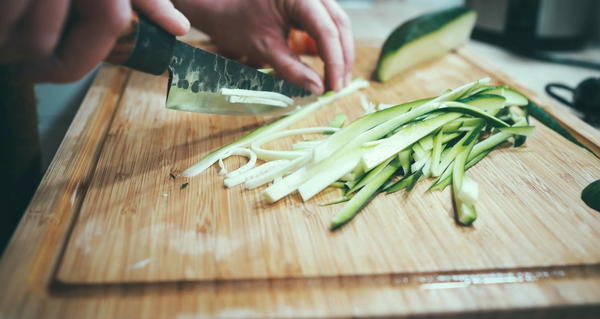 Mince: A very fine dice, usually made by dicing from a Julienne cut.

Paysanne: A thick, rustic style of dice, usually made by dicing a thick baton cut.

Rondelle: A round dice. 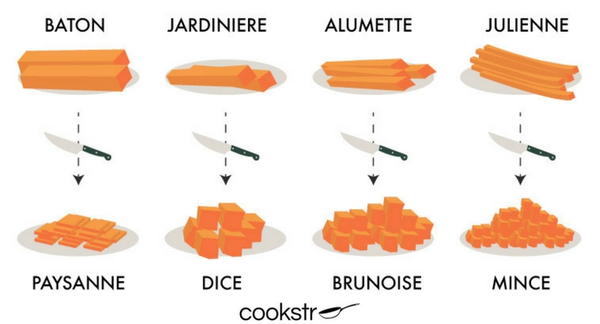 Apéritif: A drink, usually alcoholic, that is used to prepare the palate for the meal. These are typically heavy and dry beverages.

Amuse-bouche: A French term that means "mouth tease," an amuse-bouche is a kind of appetizer.

Digestif: The opposite of the apéritif, a digestif is a drink, usually alcoholic, served after the meal. These are often lighter, sweeter dessert wines that are said to help with digestion.

Entrée: From the French word for "entrance," this term used to refer to the course that would "introduce" diners, so-to-speak, to the main course. Now this word commonly just refers to the main course of the meal.

Entremet: The French word for "interlude" or "intercede," this refers to a small dish, usually a dessert besides a pastry, that is served between courses as a way to cleanse the palate.

Hors d'Oeuvre: A type of appetizer. The French phrase means something that's outside of one of the main courses of the meal.